Skip to content
Eight Days A Week
I ask myself why God did not use the chance to melt down the world again after the first seven days and to make it simply again on the eighth day. The first version was already quite ok, but, honestly, also still expandable – just what the alleged crown (lat. corona) of the creation concerned.
«Eight Days A Week» plays the creation seven plus one week long again and again anew and finds out that in the last night still a new kind of creation creeps in, namely the man-made one. In the end, there is even a whole week that man himself creates and dominates: the six transitional days of the French Revolutionary calendar, left over at the end of the year by the decimal straightening of the calendar. 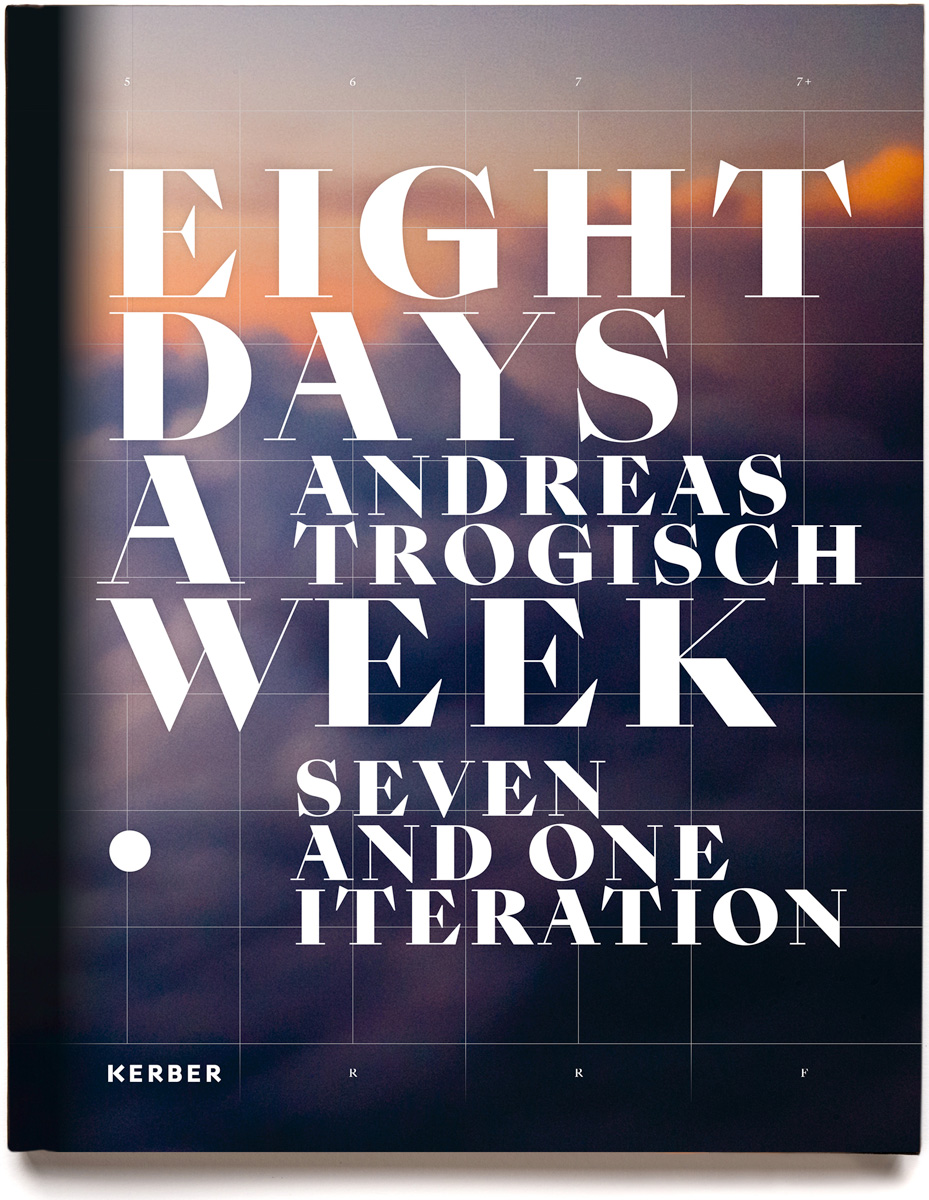 Vineta
… consists of two series of images from the declining GDR: portraits from 1985 and cityscapes from the summer of 1990, the anarchic agony between the Volkskammer elections and monetary union.
«Vineta: it was a kind of East German Atlantis. At the GDR’s polytechnical secondary schools, every child knew the legend of the city that had sunk into the Baltic Sea. That had to sink. Because Vineta’s citizens were ungrateful. They couldn’t appreciate what they had. They threw caution into the Baltic Sea winds despite a final warning before their demise. In the end, a storm surge pulled the city, with mice and men, down to the sea’s dark depths. To the present day, Spökenkieker [prescients, people who see ghosts] claim to be able to see Vineta at the bottom of the sea and hear the golden church bells strike among the crashing waves. […] The Venitaner didn’t appreciate what they had. Not their fault. A fault? Having become foreign in their own land. At fault was the little bit of personal freedom that everyone had staked out like a garden. A freedom that was worth more than a valid passport. A connectedness among those who had remained, a letting go by those who had fled, a longing for the other, a longing for something that one didn’t really know too much about.»
(Excerpt from the text of Anja Maier) 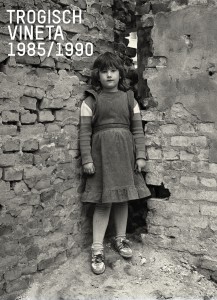 Runway
… contains nothing but the reproduction of a strip of the so-called “center line” of runway 09R/27L of the former Tempelhof Airport. The 30 m long strip is reproduced in its entirety and its richness of detail unfolds a fascination all of its own.
A tour through the book is available here and mor information is available in the in the leaflet accompanying the book.
«A crazy, great, consistent, minimalistic masterpiece.» – Josef Chladek 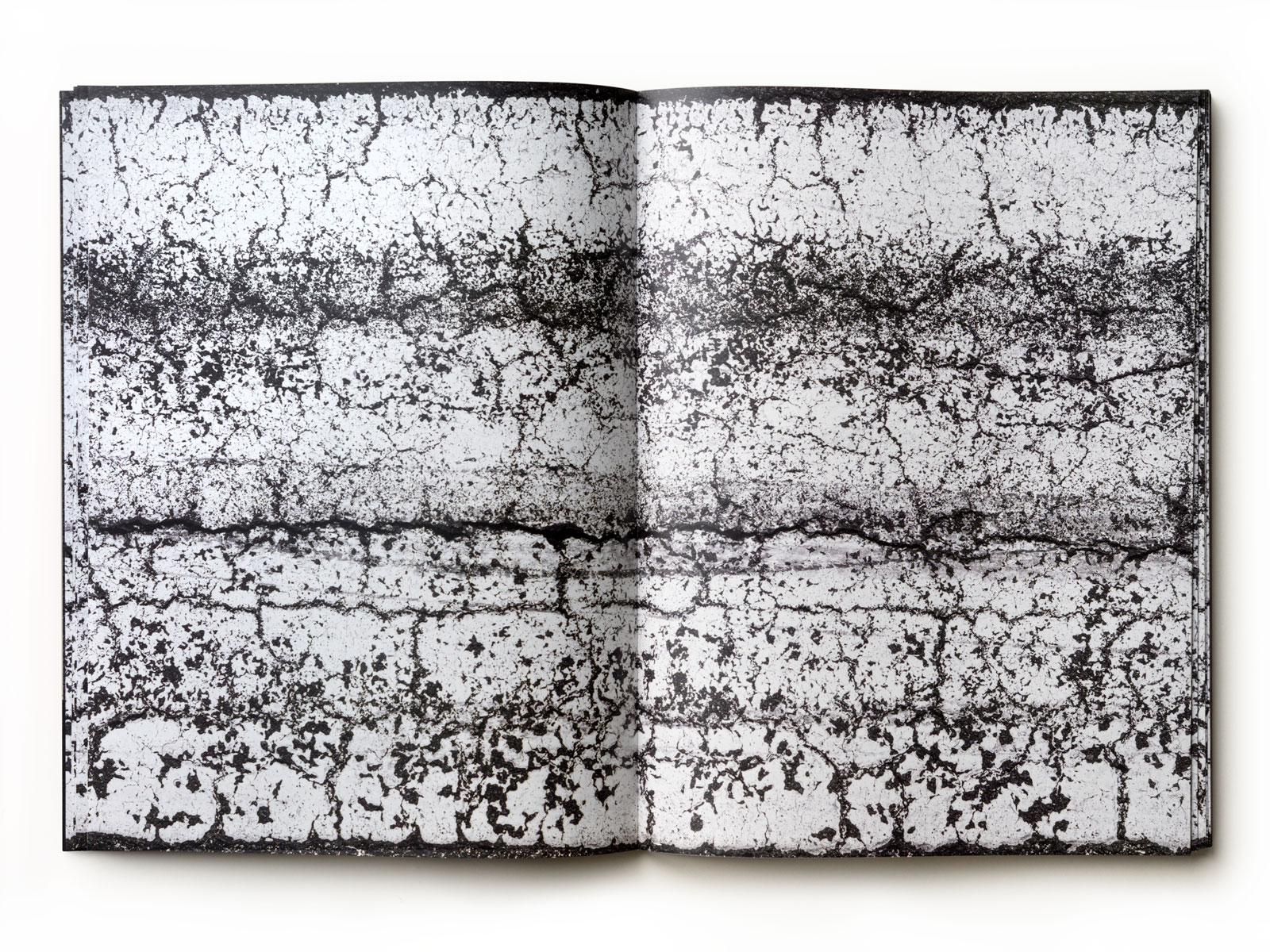 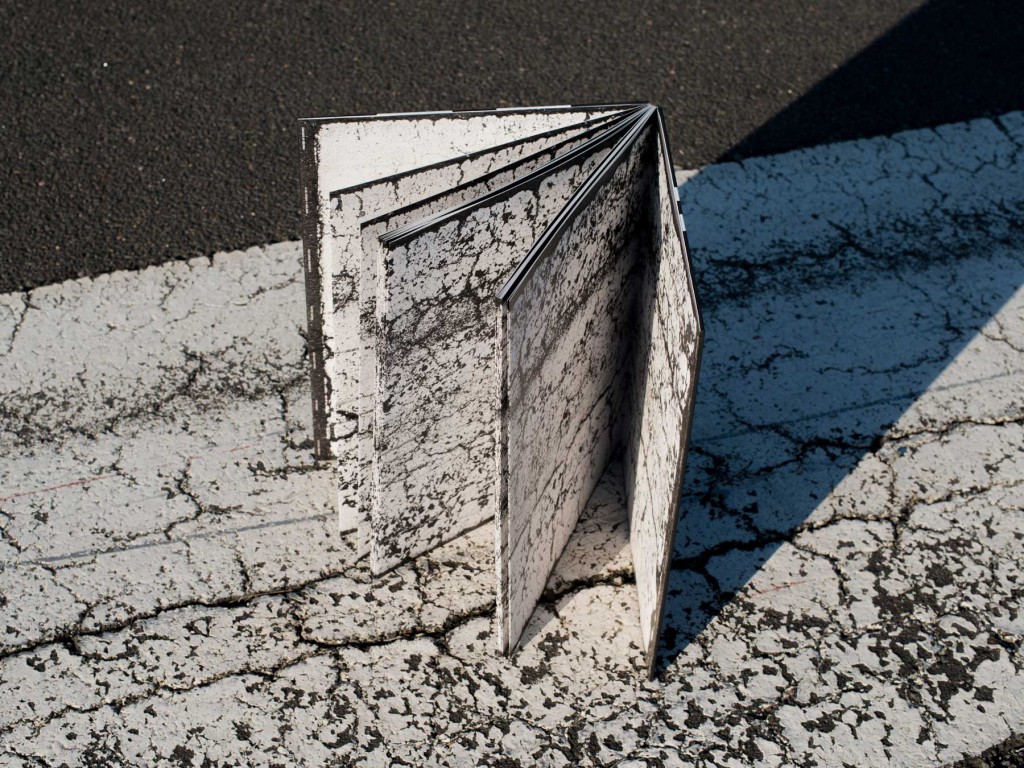 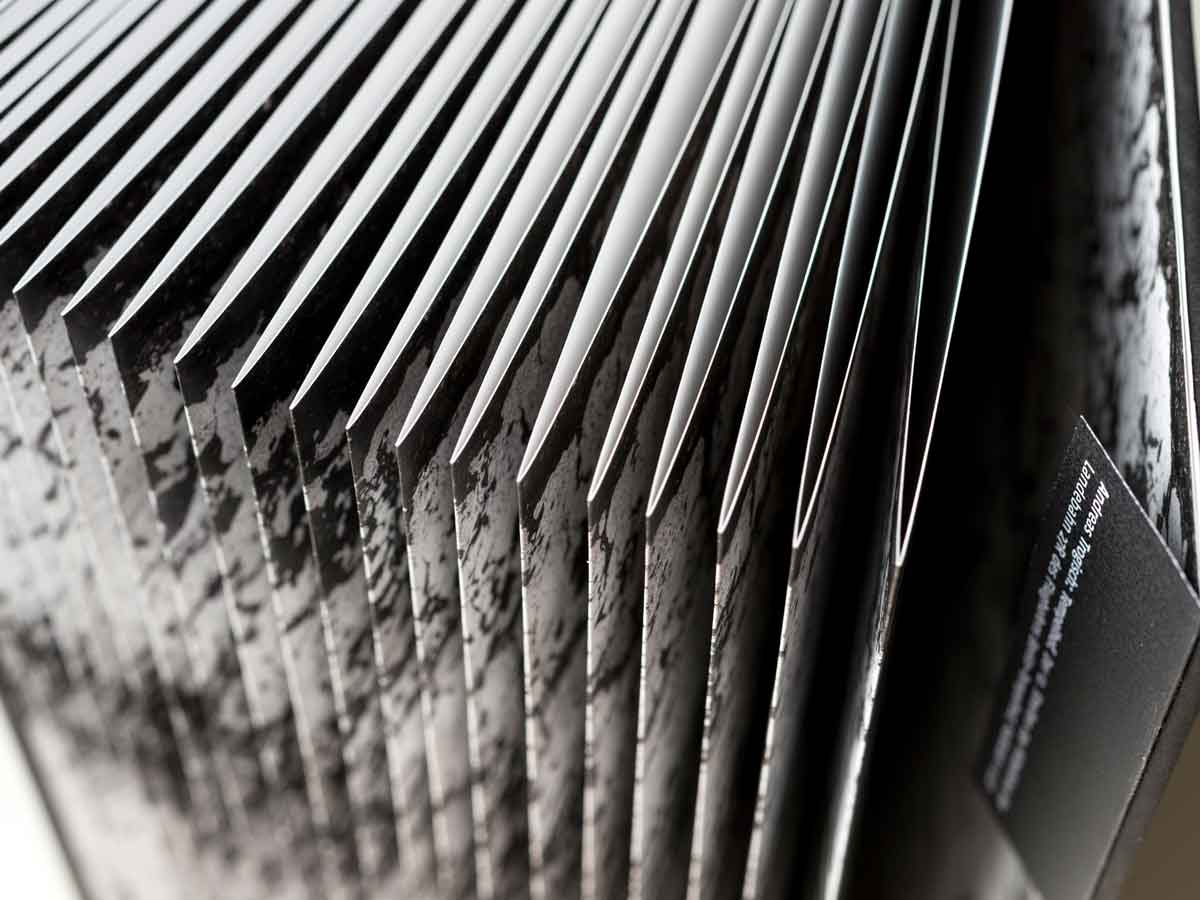 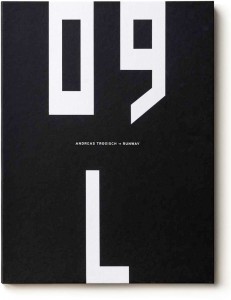 Aphasia
‹Aphasia› is a neurological disorder in which patients can no longer grasp the lexical meaning of language, but can grasp its emotional content. They can guess the truth of what is being said from the speaker’s facial expressions and tone of voice – without being able to say what it is actually about.
In my photographic work, I have always been interested in the discrepancy between the representational, «correct» meaning of objects and their visual appearance. Since I’ve been using a digital pinhole camera, I’ve found a way to simplify the appearance even further and thereby make this tension more clearly visible.
I try not to say: «This is how it is,» but rather, «This is an image caused by something that looked like it reminded me of something for a brief moment.»
Each of the 250 copies has a 3D lenticular image as the title! 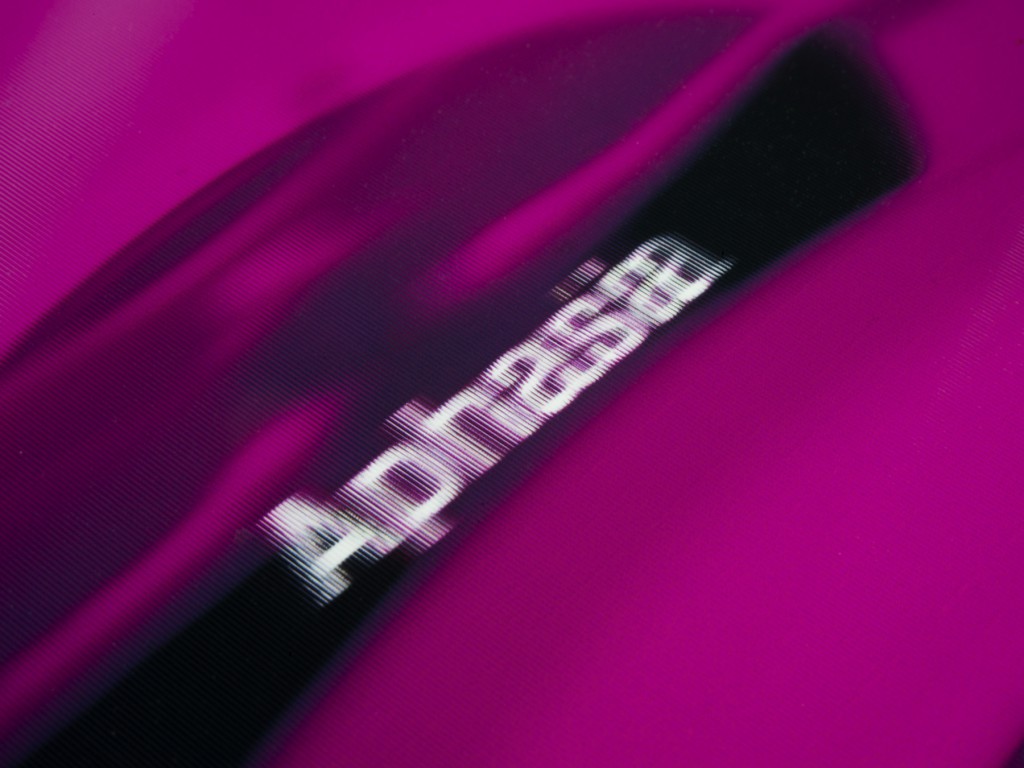 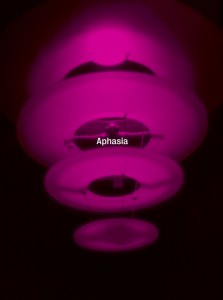 Replies
… is structured as a series of small conversations, perhaps like a small group of friends sitting together at dinner. One person says something, the next takes up the subject, then the next again, until everyone has contributed something or even just nodded approvingly. Then they are silent for a moment until the conversation revives with a new twist.
The book brings together pictures taken around the world in recent years that are as fleeting as a phrase picked up in passing.

At the same time, a special edition in a slipcase with a signed print was published in an edition of 50 copies at a price of €160.
Nominated for the 2015 Photo Book Award of the German Publishers and Booksellers Association. Listed as one of the most important, beautiful or interesting books of the year on: Photonews Blogbook: Die Besten Fotobücher 2014, im Photobookstore Magazine, London: Hannes Wanderer’s Photobook Picks for 2014 sowie Favourite Photobooks of 2014 by Martin Amis 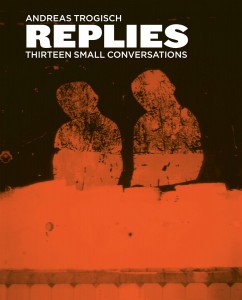 Photo books are related to atlases because they, too, attempt to encircle a subject with a selection of images and to generate new content by juxtaposing images.

«Desiderata» is an attempt to structure the mass of my images, a task I was unable to solve for 20 years. Heike Grebin, who developed the concept and layout of the booklet series, and I decided to make cuts across the material:

«Von Ferne» contains a selection of images taken from 1982 to 1989; my first seven years of photography, ending with the end of the GDR, which appears only incidentally, but was nevertheless decisive for my range of movement: Berlin, Warsaw, Prague, Budapest, Romania.

The second volume, «Magico», attempts the same, mirrored on this timeline, atmospherically narrower and spatially broader, without a radically different language appearing.

«Mercedes», the third volume, is extremely focused thematically, formally and temporally: it contains images of the remains of a burned car, macro shots, taken within a radius of three meters and within half an hour, and the only ones in color (although «color» is actually an exaggeration).

«Technik» attempts a contemplation on the parts of our thing-world that are made to fulfill reasonable purposes, and yet in which failure is expressed again and again: to human inability, gravity, corrosion – or whose reasonable purpose disappears behind the effort, allowing a surprising poetry to emerge instead.

«Asphalt» can be described by one line of sight alone, downward. It contains images of circumstances that can apparently be photographed at any time, but which are in reality of the utmost fleetingness. Not only is one not used to looking down in this way and really looking at the ground, but the patterns one sees are only visible for a short time, in certain light, in certain humidity, shortly after rain, for example, when the cracks in the asphalt still appear black, while the large areas have already dried brightly.

The last volume, «Desiderata», programmatically summarizes all this and spans an arc from my very first photograph to the very recent present.

This «freestyle sorting», or perhaps only its interpretation, was inspired by the so-called facet classification, which provides for the flexible definition of order dimensions within which contents can be arranged. This would correspond in this case to a temporal, a motivic, an atmospheric etc. level.

The six photo folders were published in 2010/2011 in an edition of 100 numbered and signed booklets each in a box by Peperoni Books and are unfortunately out of print. However, there are still some unofficial unsigned and unnumbered remaining copies here in the store. 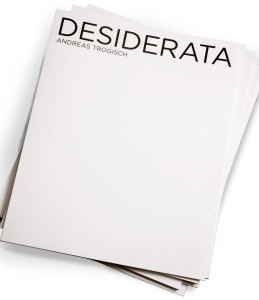